Aliens are three aliens who abduct Samson and demand cheese. After kicking Samson out of their flying saucer, they trick Samson by disguising themselves as "vague background characters" (Harold, Gordon, and Wilbert) to help Samson get rid of the Canadian Trouts, who Samson thinks are the real aliens. This was due to both groups wanting cheese. Later, they go to Acorn Flats, and befriend Nina. They have a strange fetish for fiddle music, dancing strangely and making fart noises when hearing it. They're voiced by Jeff Bennett, Tom Kenny, and Mr. Lawrence. 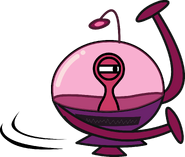 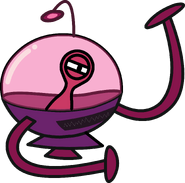 Retrieved from "https://camplazlo.fandom.com/wiki/Aliens?oldid=23356"
Community content is available under CC-BY-SA unless otherwise noted.