Almondine is a recurring character of the series.

Almondine is a wise beige owl scout from Acorn Flats. She has dark brown hair, wears glasses like Nina, and is stereotypical "nerd" in appearance. She's the most commonly seen secondary Squirrel Scout.

It is known that she loves mathematics, and she also enjoys theater. Her favorite actor is Rock Buckskin, and she feels that his latest flop, "Caribbean Caribou Two: Back in Action" really had no plot. She is the only Squirrel Scout whose a member of the Rock Buckskin Fan Club, of which is led by Jane Doe. She also helps Patsy, Nina, and Gretchen steal Camp Kidney's parade float.

Her Camp Kidney equivalent is Samson, and they both wear large glasses. They even have somewhat the same personality. However, for example in Dosey Doe, during the dance sequence and while dancing together, before Patsy tells all of the other Squirrel Scouts to beat their partners up, they both look down at the floor, looking sad. However, it might be known that they both have feelings for each other and a quiet relationship with each other, as well as with her being motherly to him. But because of this, however, his parents are jellyfish who drive him crazy.

Almondine along with Amber and Gretchen are the accountants for their cookie business. She makes an odd statement during the Fru Fru pageant, saying "I would like to be given the ability to fly"; somewhat ironic since she's an owl. During a field trip with the Beans, she ends up sitting alone, and having the only available spot on the bus, much to Edward's discomfort. 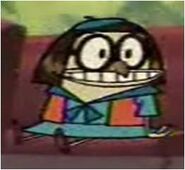 Retrieved from "https://camplazlo.fandom.com/wiki/Almondine?oldid=23360"
Community content is available under CC-BY-SA unless otherwise noted.