Amber, also called The Light Pink Hare, is a character in Camp Lazlo series. She is a rabbit scout from Acorn Flats.

Amber is the most cheerful Squirrel Scout whose friends are Patsy, Nina, Gretchen, Almondine, and Suzie. In It's No Picnic, she meets Camp Kidney's scoutmaster and calls him "Loumpus", instead of "Lumpus". In Swimming Buddy, Amber sits between Honey and Almondine and observates boys who went on swimming pool. In Marshmallow Jones, she roasts marshmallows with Patsy, Gretchen, Nina, and Almondine. In "Dosey Doe" Amber is seen with Honey and Suzie. She dances with Skip. In The Nothing Club, when Raj images himself as a DJ, Amber watches him closely. In Snake Eyes, she is seen between Almondine and Suzie. In Miss Fru Fru, she searches on encyclopedia what is "fru fru". In Love Sick, she drinks tea with Suzie. In I've Never Bean in a Sub, she works as the accountant from Squirrel Scout's cookie business. In Snow Beans and Squirrel Seats, Amber joins in singing on the bus trip. She watches a Mascot Competition with other Squirrel Scouts in Mascot Madness. She jumps into rope with Almondine in Beany Weenies. In Hard Days Samson, Amber chases with her friends Samson. In Squirrel Scout Slinkman, Amber sits between Gretchen and Almondine. She also appears in Taking Care of Gretchen and Call Me Almondine. 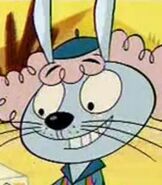 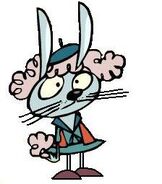