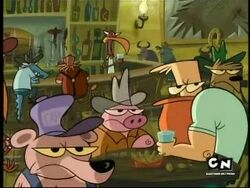 Bar Guys Their first appearance was on Prickly Pining Dining, while Lumpus was looking for the Jelly Trio. They also appeared in I've Never Bean in a Sub, as they were in the same place and the Manure, except they growl, and are spectators when learning Lazlo is stacking the beans and cheered. Their third appearance was in Lazlo Loves a Parade, in which they finally spoke. A turkey is the bartender. 4 of them are a pig, bear, pelican and beaver, who look a lot like Chuck, Gordon, Mort and Wilbert respectively.