Beans Are from Mars is the episode of season one and the first episode on the series.

The Squirrel Scouts suspect Lazlo and his friends are from another planet, and so they kidnap them for some genuine alien interrogation.

The episode starts out at the Mess Hall with Scoutmaster Lumpus teaching the scouts about First Aid. He decides to have the Jellybean cabin trio use a First Aid doll to practice curing the doll from a stomach ache. During the Jellies' "demonstration," the other scouts suddenly hear an ice cream truck passing through Camp Kidney. Chip and Skip manage to go after the truck while Lumpus stops the other scouts from trying to escape. Meanwhile at Acorn Flats, Patsy, Nina, and Gretchen are seen enjoying eating canasters of ice cream until they see Chip and Skip still following the ice cream truck making the three scouts asking Ms. Mucus why boys are so weird and gross to which she replies that they are from Mars. The Squirrel Scouts end up believing that the Jellybean trio are actually aliens. They decide to spy at the Jellybean cabin tonight to see if they truly are aliens or not.

Later at the Jelly cabin, the Jellybean trio are still seen trying to use the first aid doll from earlier in the episode in order to cure it from it's stomach ache mentioned earlier by Lumpus. They use two slippers to create static electricity so they can pretend to defibrillate the doll. They then play around with the static electricity and start glowing and floating around the cabin. The Squirrel Scouts then peek through their totem pole and suspect the Jellies as aliens upon seeing them electrified and glowing. The Squirrel Scouts later return to Acorn Flats and plan to kidnap the Jellies.

The scouts later return to Camp Kidney and capture the three Bean Scouts. The frightened Jellies ask the Squirrel Scouts why they are kidnapping them to which they reply to that they known that the three of them are aliens. This puzzles the Jellies and they decide to pretend they really are aliens who are attempting to take over the world and eat everyone's brains. The Squirrels then demand the Jellies to take them to their alien leader. The Jellies then go to their cabin to create a tall electric four armed decoy to make the Squirrels believe is their alien leader. The Squirrels become frightened by the decoy and begs the leader to spare their lives. The leader agrees to spare the three scouts if they give the three bean scouts ice cream.

The Jellies are later seen next morning enjoying canisters of ice cream and end up getting the brain freeze. The Squirrel Scouts suddenly appear and reveal that they added glue to the ice cream. The Jellies then decided to use static electricity on themselves again which causes the Squirrel Scouts to scream in terror. 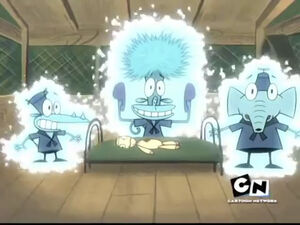 Click here to go on Beans Are from Mars image gallery