Beany Weenies is the twenty-second episode of season two and the episode on the series.

Ms. Mucus volunteers to help the Bean Scouts pass their fitness test, so they can earn their camp back. 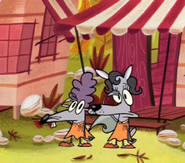 Retrieved from "https://camplazlo.fandom.com/wiki/Beany_Weenies?oldid=23179"
Community content is available under CC-BY-SA unless otherwise noted.