Camp Dinkey is the twentieth episode of season four and the ninety-sixth episode on the series.

The Bean Scouts pass by an advertisement about a camp that was "Made just for them." 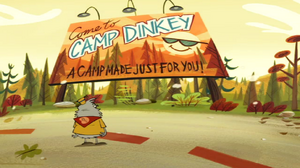 Retrieved from "https://camplazlo.fandom.com/wiki/Camp_Dinkey_(Episode)?oldid=23227"
Community content is available under CC-BY-SA unless otherwise noted.