The entire camp is rolling in stinkweed, much to Samson's dismay. After a visit from the smell fairy, Samson comes to admire the wonderful stench.

We find the Jelly Beans walking in Camp Kidney when they smell something horrible. Clam remembers the smell and so do Lazlo and Raj. They realize that the smell is coming from stinkweed and they run over to a stinkweed patch. Dave and Ping-Pong are walking when they smell stinkweed. Suddenly, the Bean Scouts go over to the stinkweed patch. Samson tells them that they have to lather, rinse, and repeat when they are taking a shower. He smells the Jelly Beans and notices that they smell really bad, but they tell him that they don't smell bad and they rolled around in stinkweed. Samson wonders why they want to do that and Lazlo tries to encourage him to roll around in stinkweed. He won't try it because he can't handle anything that is not clean. Samson smells something and notices that the whole camp smells bad all because of stinkweed. He runs away and Jelly Beans decide to teach him how to love the stinky.

When Samson is cleaning his cabin with a vacuum, someone rings the door bell. He opens it and finds a box with a card on it. Samson reads the card. It is congratulating Samson and he opens the box up. It is full of stinkweed and he runs to the showers to clean himself. Now, Samson is cleaning his cabin with air freshener and decides to go outside, but he falls in a garbage can and Lazlo asks him, "Are you stinky now?" Samson screams and runs over to the showers again.

At the Mess Hall, Samson is just about to eat his lunch when he panics. "Is there something wrong?" Lazlo asks Samson. Samson notices him and tells him that three peas got mixed up with his mashed potatoes and Lazlo And Say "FOOD FIGHT!" throws the mashed potatoes and peas at Skip to start a food fight. Skip hits Chip with his food. Most of the Bean Scouts in the Mess Hall start launching food at each other. Samson starts to walk out of the Mess Hall, being careful not to get covered in filth. He made it with out getting dirt and puts on his hat, but food falls all over him. Once again, he runs over to the showers.

The Jelly Beans try to convince Chip and Skip to make Samson to be stinky, but they can't do it. Wait, there's someone else that can do the job and that's Cousin Stinkbug. Cousin Stinkbug goes into Samson's cabin and falls on him while he's sleeping. Samson wakes up, screams, and turns the tables on Cousin Stinkbug and made him cleaner. Now, Cousin Stinkbug is thinking on going to Sunday school.

Lazlo finds that Samson is leaving and asks him, "Where are you going?" It turns out that Samson is going to the forest where it's fresh and clean and Lazlo tries to persuade him not to leave Camp Kidney, but fails.

Samson is walking in the forest where there are many trees and flowers surrounding him. He goes on the Rinsing Rainbow and grabs some soap. Now, he is in a soap bubble and the Sun compliments him about being the cleanest Bean Scout. He lands on giant towels, but it is really only a bush.

Samson goes over to a log, cleans it, and sits on it. A squirrel comes by and jumps on Samson's lap. He pets her and gets worms and other bugs on his hand and his shirt. The episode shows that the germs looked like Lazlo. Samson goes to a river and washes off his shirt. When he takes his shirt out of the river, he finds that there are hairs on his shirt that were coming from Lumpus bathing in the river. Samson puts his shirt back on, but the shirt is making Samson itchy. Then, wind blows mud on his glasses. He lies on the ground and wonders why he was cursed with his sensitive nose and he thinks that Lazlo is having a good time over at Camp Kidney and it turns out he's not having a good time.

Raj and Clam come over. Raj wants him to go dumpster diving again while Clam wants him to eat an onion, but Lazlo doesn't want to because Samson is not at camp. Raj has an idea that the only way to bring Samson back to camp is to take a shower. Lazlo tells Raj to tell everyone to meet him at the showers at 3:00.

Although it's 3:00, no one is at the showers except Lazlo. He calls them to get out of the bushes. They can't take a shower because they've gone too far and they can't go back to being clean now. Lazlo takes a shower anyways and tells them they are going to miss the fun. He comes out of the showers and he's glowing. Lazlo turns his head side to side and rubs his arms. He does other movements to squeak. The Bean Scouts are jealous, so they go take a shower as well.

Samson is on the ground and says things about how he misses Camp Kidney and the Bean Scouts and how his eyes are burning up. He sees stinkweed and decides to jump into the patch. It's so stinky, that he is now frozen. Odoriferous, the smell fairy shows up and rewards him with a new nose and take away his fear of filth. With his magic wand, Odoriferous gives a new nose. Samson is now running to Camp Kidney, but where is everyone? They are coming to Samson and they are squeaky clean. Lazlo notices his new nose, but Samson smells bad, so the Bean Scouts run away from him. Chip and Skip don't think he smells bad because they don't have noses and they walk away. They talk about getting a new nose and Samson says, "Merp." 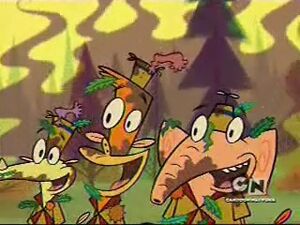 Retrieved from "https://camplazlo.fandom.com/wiki/Camp_Kidney_Stinks?oldid=14591"
Community content is available under CC-BY-SA unless otherwise noted.