Cave Chatter is the sixth episode of season four and the eighty-second episode on the series.

Samson uses a frozen caveman to talk to, but the Jellies find his icy buddy and try to thaw him out, much to Samson's dismay. 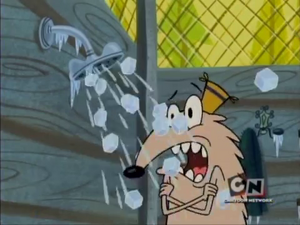 Retrieved from "https://camplazlo.fandom.com/wiki/Cave_Chatter?oldid=24036"
Community content is available under CC-BY-SA unless otherwise noted.