Chef Heimlich McMuesli is Camp Kidney's resident goat chef and a Vegetarian Most of his food sits on the eccentric end of the health food menu, almost always including vegan ingredients, such as tofu, much to the disgust of the campers. He despises fatty foods and ensures no one is eating anything unhealthy. He is voiced by Carlos Alazraqui.

Chef McMuesli has a rather calm and cheery personality, being what one could consider a hippie. He drives a van complete with flowers painted on the side and resides in a psychedelic hippie pad known as the "Temper Teepee". The campers are sent to the Temper Teepee when they lose control of their tempers so that Chef McMuesli can help them deal with their anger problems. Despite this, he himself is prone to losing his temper and can be rather impatient at times, usually when the campers mock his meals.

Chef McMuesli is a health food nut and cooks mostly tofu based food which the campers constantly find gross. He seems somewhat oblivious to the fact that campers hate his cooking and even considers serving "normal" camp food to be a punishment. He forbids the consumption of junkfood, claiming that "only junkheads eat junkfood." As such, he keeps all junkfood in camp, such as candy and soda, locked away behind high-tech security systems so that the campers can't steal them.

Although he often doesn't get along with the campers, he has acted friendly towards them on occasion. In "Beans and Weenies", he tries his best to teach Lazlo, Raj, and Clam how to properly make weenies. In "Meatman", although he was angry with Lazlo and his friends at first for mocking him, he comes to their rescue when they are attacked by Meatman making karate sounds and just fooling around. Meatman realizes that Chef McMuesli is wasting his time and spits a meat-bomb on him saying that he’s been beefed and he died. In "Temper Tee Pee", he tries to be patient with Edward and Gretchen and help them control their anger.

In "Prickly Pining Dining", he was suddenly taken ill. According to Nurse Leslie, he was "too sick to be moved" so badly that he wasn’t able to make food for Camp Kidney, thus forcing them to go eat at Beef Lumberjacks.

McMuesli seems to enjoy gardening, as it is revealed in "Meatman" that he had a soy bean farm that was destroyed by Lazlo. McMuesli has also written at least one poem, entitled "Tree", which was read by Gretchen in "Miss Fru Fru". 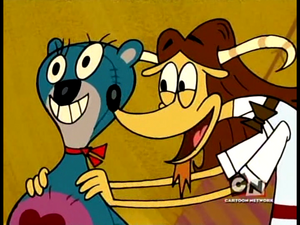 Retrieved from "https://camplazlo.fandom.com/wiki/Chef_Heimlich_McMuesli?oldid=23125"
Community content is available under CC-BY-SA unless otherwise noted.