Club Kidney-Ki is the sixth episode of season two and the thirty-second episode on the series.

Lumpus can't stand the fact that Slinkman is under doctor's orders to take a vacation, so Lumpus decorates Camp Kidney Hawaiian-style, hoping to fool Slinkman.

In Camp Kidney Beach, Lumpus is looking at magazine covers and they are boring until he finds a postcard saying that Slinkman has to revive himself to Hawaii. Lumpus thinks that Camp Kidney has everything Hawaii's got.

Slinkman looks terrible (the stubble and red sore eyes) and the campers are playing volleyball. Chip does a move he learned from Denmark, sending Slinkman to Nurse Leslie, making him say "Slinkman, you look terrible!".

However, everything Slinkman can see and hear is Camp Kidney (his heartbeat even says "Camp Kidney, Camp Kidney"). The nurse orders Slinkman to take a vacation. However, Lumpus doesn't want him to go. So Lumpus takes Slinkman to Hawaii but in fact takes him back directly to the "CAMP KIDNEY" gate. Slinkman sees he's still in Camp Kidney. Lumpus tells him that it's actually Club Kidney-Ki, a place in Hawaii.

In the morning, Slinkman wakes up with his word "Aloha Hawaii!". He sees his room. Slinkman tells Lumpus that he thinks he's still in Camp Kidney. However, Lumpus tells Slinkman it's not Samson, it's a Hawaiian person and there's Hawaiian stuff. Slinkman goes to the beach and no one is running the activities.

In night, Lumpus is awaken by Slinkman. Chip and Skip do a hula dance. However, Lumpus is dressed up as a hula dancer and fed up he tells Slinkman that he lied and he's still in Camp Kidney. But Slinkman thinks Lumpus is being delusion. Lumpus asks Lazlo, Raj and Clam and they playfully say they're in Hawaii. This gives Lumpus a mental breakdown to think he was in Hawaii all the time. Slinkman says that the vacation is over, and takes Lumpus to the nurse's office (presuming Leslie will correct their minds). 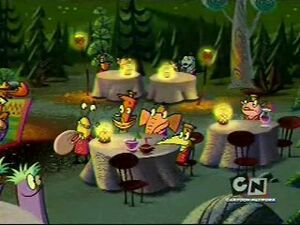