Creepy Crawly Campy is the ninth episode of season three and the sixtieth episode on the series.

Raj is usually terrified of insects, but an oddly cute bug has him turning over a new leaf. 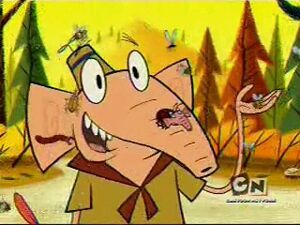 Retrieved from "https://camplazlo.fandom.com/wiki/Creepy_Crawly_Campy?oldid=21677"
Community content is available under CC-BY-SA unless otherwise noted.