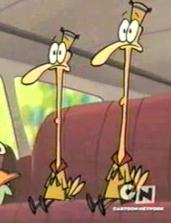 They got revenge on Edward for insulting them in Ed's Benedict by sneaking an egg into his bed as a prank and tricking him into thinking he laid it.

Retrieved from "https://camplazlo.fandom.com/wiki/Dave_and_Ping_Pong?oldid=9554"
Community content is available under CC-BY-SA unless otherwise noted.