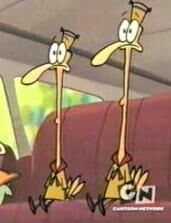 Despite them acting very much the same, Dave is a bit more easily impressionable than his brother. He used to write letters to his grandma every day, as seen in Boxing Edward, but Edward tricked him out of it in order to get stamps to mail himself out of camp. So he decides to mail himself to his grandma, causing more problems for Edward. In 7 Deadly Sandwiches, he chose to suspend from a rope around his waist above the stage for "dramatic effect". This backfires when Scoutmaster Lumpus tries to pull on the rope from a corner of the stage to make an outfit for himself, causing poor Dave to go flying back and forth and the set to collapse.