Just then, the eggs all hatch, including Edward's, and to the platypus' surprise, it's not the same species! The birds' mother comes to collect her chicks and flies away, but not before scolding the confused Edward.

Dave and Ping Pong come running and apologize to Edward, they confessed explaining that they put the egg in Edward's bed, and that they wanted to teach him a lesson. The still confused Edward inquires "You mean, I'm not gonna be a mommy?" This leads Slinkman to remark that Edward is "a little unnatural", which results in everyone demanding explanation and having to have the films on each of their species shown to them. 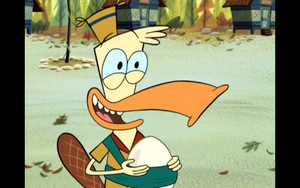 Retrieved from "https://camplazlo.fandom.com/wiki/Ed%27s_Benedict?oldid=20404"
Community content is available under CC-BY-SA unless otherwise noted.