Edward's Big Bag is the first episode of season five and the ninety-ninth episode on the series.

An odd sleeping bag creature shows up on a camping trip.

Unfortunately, when the morning comes, Edward can't find his way out of all the sleeping bags and the other Bean Scouts think that all of the giant sleeping bags stuck together is a giant monster! Meanwhile, Slinkman is having fun away from the group in a mud bath with other slugs, and realizes he has to go, but stays a little longer after some attractive female slugs arrive on the scene.

Back at the camp, one beaver claims to "speak monster", and, misinterpreting Edward's muffled screams, says the monster's name is "Kevin". For a little while, the Bean Scouts all have fun with "Kevin" (which just causes Edward no end of physical pain), until finally Edward gets fed up and sadly plods away from the group, knowing that he'll be stuck in the sleeping bags forever. Lazlo advises that they should all just give "Kevin" a group hug, and they do, until they realizes that the beaver doesn't speak monster, "but I do speak French." The Bean Scouts are terrified again.

Slinkman arrives back from his mud bath to see the Bean Scouts in a panic and asks them to explain themselves. Samson gives a fairly vague explanation and talked about "him". Slinkman inquires who "he" is, and Samson points over to the trapped Edward. Slinkman goes over to investigate and tells them it's a bunch of sleeping bags sewn together, but nobody can hear him.

Inside the sleeping bags, Edward has grown into more and more of a panic and is hopping up and down like a mad thing, causing him and the bags to fall on top of Slinkman.

The Bean Scouts watch this and Raj comes to the conclusion that "We kill it!" They then all start beating the 'monster' until Lazlo tells them it's just a bunch of sleeping bags zipped together. Going inside the bags, Lazlo finally finds Edward, who is overjoyed to see him. 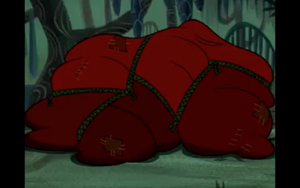 Retrieved from "https://camplazlo.fandom.com/wiki/Edward%27s_Big_Bag?oldid=23229"
Community content is available under CC-BY-SA unless otherwise noted.