Raj panics when he loses his retainer, and Clam and Lazlo try to cheer him up.

Raj eats their lunch and takes his lunch over to a conveyor belt. Then, he chases after it on the conveyor belt after he realizes that he doesn't have his retainer and the Mess Hall explodes.

Raj starts to miss his retainer and tells a fact about him and his retainer. He shows a picture of his brother without a retainer as to a question asked by Lazlo. Lazlo tries to cheer him up, but Edward and all of the other campers make fun of him.

Now, the campers are on a canoe trip and Lazlo comments on the trip while Edward acts like a tour guide. Raj starts to swing his trunk around and says things like, "I don't care about the mountain air."

Lazlo decides to go another way and it is now time for lunch. Raj tells about another memory of his retainer and Lazlo falls in the water. Clam and Lazlo decide to have an oar fight.

To make Raj feel better, Lazlo plays some banjo music and sings. Clam hits himself with an oar a few times over how awful the song is.

Luckily, they get saved all because Raj holds on to something, but not for long. They fall down the waterfall and Edward hands Chip and Skip his pants. Raj wants to jump of the waterfall. Chip and Skip convince Raj not to jump while Edward convinces Raj to jump. Lazlo reminds Raj of the time he said that he didn't need a retainer. At first, Raj said that it was before he thought he lost it for good, until Lazlo asked him what’s really important: a retainer that can fix it his teeth, or his best friends.

Raj thinks about and imagine his one hundredth birthday and he thanks all of his friends for coming to the party. He asks them to sing the birthday song. His retainer talks and Raj asks where his friends are. The retainer reminds him that he chose it instead of his friends.

Finally, Raj chooses his friends and tries to get them over a branch safely, but they fall anyways. Edward says, "Hooray!" but then the Jelly Beans fall, but don't seem to be hurt. Instead Edward says, "Whatever," and Chip and Skip said, "Hooray!" Edward takes his shirt back, but not his pants. Raj realizes that he'll never have a smile. Then, all of the Jelly Beans' teeth break and fall out. 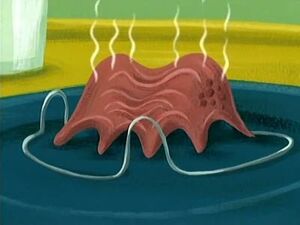 Retrieved from "https://camplazlo.fandom.com/wiki/Float_Trippers?oldid=23148"
Community content is available under CC-BY-SA unless otherwise noted.