Gone Fishin' (Sort of) is the episode of season one and the first episode on the series.

Scoutmaster Lumpus tries to hook a fish in Leaky Lake, all the while trying to keep Lazlo, Raj and Clam as far away as possible.

The episode starts out with Edward, Samson, Chip and Skip, and Dave and Ping Pong fishing at Leaky Lake. However they end up catching nothing but a bunch of snow globes much to Scoutmaster Lumpus' dismay. Lumpus declares that he will pull a fish from the lake if its the last thing he will do. The Jellybean cabin trio (Lazlo, Raj, and Clam) suddenly arrive and surprise Lumpus causing him to fall into the lake. Lumpus becomes even more enraged and tell his scouts that he will indeed catch a fish if he gets far away from all of his clumsy as possible. Dave then points out that maybe there are no fish in the lake until Jane Doe and the Squirrel Scouts arrive in their boat with several fish jumping right inside it. Lumpus becomes frustrated and tells Slinkman to have his Bass Eliminator fishing boat ready first thing tomorrow morning. Lazlo decides to catch a fish for Lumpus himself, but the other scouts tell him the many terrors that go on in Leaky Lake, most notably the Sea Serpent of Leaky Lake that will devour anyone in a Bean Scout uniform. But Lazlo was still determined to catch a fish for both Lumpus and Camp Kidney. Raj and Clam agree to help him but the other scouts still refused to join in.

The next morning, Slinkman is seen sneaking out of the Lumpus' cabin getting Lumpus' Bass Eliminator fishing boat ready on the dock. The Jellybean trio then arrive on the dock and find Lumpus' boat. They end up playing spaceship in it and accidently set the boat on and start zooming off on the boat. Meanwhile Lumpus and Slinkman start arriving to the dock to start cathing a fish only for them to find out that the Jellybean trio has already beaten them to the boat. Lumpus becomes angry and decides to catch the Jellybeans in his boat on a canoe.

The Jellybeans are later seen in the middle of Leaky Lake surrounded by thick fog. The fog frightens the three campers and they suddenly hear someone near them which frightens them even more. They then attack the mysterious stranger near them assuming it was the Sea Serpent of Leaky Lake. But they then realize that it was really Scoutmaster Lumpus and causes Lumpus' boat to sink due to Raj accidently pulling out the plug.

The four of them were then later seen in the canoe Lumpus took where Lazlo tries to apologize that they lost his fishing boat and they still offer to help him catch a fish. Lumpus tells the three that the only way they can help him is to get as far away from the three of them as possible. Lumpus then sends the three scouts away on a floating tube connected to the canoe by a rope and sends them floating far away from him. Lumpus is finally happily fishing all by himself until the Sea Serpent of Leaky Lake suddenly arrives behind him and starts attacking him and later eats him. Raj tells Lazlo that they should help Lumpus but Lazlo says that Lumpus specifically told them to help them by not helping at all. Raj then explains that the situation is very serious and that they should help Lumpus right away. Lazlo finally agrees with Raj and walks over to the top of the sea serpent to get Lumpus out of the serpent's mouth. He ask Lumpus if he needs their help but Lumpus sarcastically tell him that he doesn't need their help which Lazlo ends up believing for real. Lumpus then calls for Lazlo again and tells him that he really does need his help and tells Lazlo that he found a fish in the serpent's mouth. Lazlo then grabs the fish from Lumpus and cheerfully tells Raj and Clam that they caught a fish while Lumpus is still in the serpent's mouth asking for Lazlo's help.

The jellybeans invite the fish that Lumpus caught to have fish stick with them. The fish nervously asks them if he can go back into Leaky Lake when he is finished. Meanwhile Chip and Skip are seen returning all the snow globes the other scouts caught to the sea serpent who admitted that the loss of his snow globe collection is what caused his violent behavior. He then admits that he is really a vegetarian and a moose sound can be heard.

Note: This is the first episode or the series so all the characters in this list make their debut in this episode. 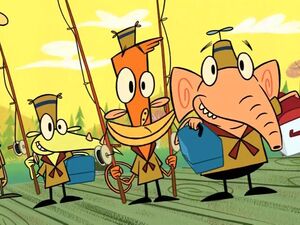