Gretchen is the secondary character of "Camp Lazlo" series. She is an alligator scout from Acorn Flats.

Gretchen is the most aggressive Squirrel Scout whose friends are Patsy, Nina, Almondine and Amber. In It's No Picnic she argues with Bean Scouts about muddle. In Marshmallow Jones, she roasts marshmallows with Patsy, Nina, Almondine and Amber. She observates Bean Scouts in Beans Are From Mars. In Dosey Doe, she dances with Clam (although she's soon trying to strangle him afterwards). In Snake Eyes, she is seen next to Nina. In Miss Fru Fru, Gretchen searches on encyclopedia what is "fru fru". In Love Sick, she helps Patsy, Nina, Almondine and Honey win a tug of war against the Bean Scouts. In I've Never Bean in a Sub, she works as the accountant from Squirrel Scout's cookie business. In Snow Beans and Squirrel Seats, Gretchen joins in singing on the bus trip.

She watches a Mascot Competition with other Squirrel Scouts in Mascot Madness. In Hard Days Samson, Gretchen chases with her friends Samson. In Squirrel Scout Slinkman, she sits next to Amber.

They are cabin mates and work together most of the time with Nina. Patsy normally makes fun of Gretchen she get mad most of the time but they have a great sort of relationship. She is annoyed with Patsy crying about Lazlo.

They are cabin mates with Nina, Patsy and Gretchen. Gretchen calls Nina Neckerly instead of Nina. Also in a episode Nina says Gretchen said the old treehouse is more room, antic which reveals that Gretchen has great taste of touch. 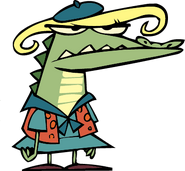 Retrieved from "https://camplazlo.fandom.com/wiki/Gretchen?oldid=13308"
Community content is available under CC-BY-SA unless otherwise noted.