Hello Summer, Goodbye Camp is the twenty-fifth episode of season two and the episode on the series.

This half-hour double episode finds the Scouts returning to Camp Kidney for the summer, only to find it closed. To prevent this from happening, Lazlo brings Raj, Clam, and Patsy on a perilous journey through the woods to find the Rock of Hope, which leads them to the Worldwide Bean Scout Jamboree to find the Big Bean to help them save Camp Kidney. However, the Big Bean is a little bean who lied to Lazlo saying his cousin Clyde sent him on the journey and that he shut Camp Kidney down. But when Lazlo finds a poem written on the inside of his hand-me-down neckerchief and realizes he went to Camp Kidney years ago, he changes his mind and decides to reopen Camp Kidney.

The Bean Scouts return to Camp Kidney for summer again. On their way, they sing the camp's song (the Camp Kidney alma mater) and parts of the camp such as the cabins and flagpole pass by on trucks. But as they get to the camp, Slinkman stops the bus and everyone realizes that Camp Kidney is no more. Where the campers all inspect that Camp Kidney was gone and find only the mess hall (That was soon taken away). Slinkman then tries to argue with the movers but they take him along with the other stuff and check him off a clipboard. Lazlo then begs for the Jelly Bean Cabin totem pole (The final part of Camp Kidney remaining). The movers then move on and tell them that the place is going to be a parking lot the day after the fourth of July. Chef McMuesli is tied up to the truck that takes The Mess Hall away.

Then Jane Doe comes in a acorn shaped car and decides to bring the Bean Scouts to Acorn Flats. in which She explains to them now that Camp Kidney has been closed down the campers will be sent to another camp. Distraught that she'll never see her beloved Lazlo again, Patsy faints.

It soon becomes night and the Bean Scouts discuss how much they miss Camp Kidney. The only one who doesn't miss the camp is Edward, who looks forward to a camp that will actually be good. Lazlo then goes over to the Acorn Flats dock and sighs. Then a giant bean (Clyde) comes out and tells Lazlo how to save Camp Kidney. where he told Lazlo that the only way to save his camp is go into the woods and find the Rock of Hope, where he would find the Worldwide Bean Scout Jamboree.

After he goes back into the water, Lazlo wakes up and it convinced that this was all a dream. Then he explains the plan to his fellow campers, Raj and Clam join him and everyone wants to join but Edward intimidates everyone not to join. Lazlo, Raj and Clam are next seen going on top of a hill and have a water break. Raj then drops their overpacked backpack on the edge as they continue and use dead miners logging chute to get the Rock of Hope. Meanwhile the other campers are at Acorn Flats and Edward tells them that a new camp will be great. He soon goes to where Jane Doe was talking to another camp. Edward then takes a pamphlet, but it is Math Camp and he screams in anguish.

The jelly beans are then seen on the chute and were just about to finish until a plank breaks and Clam's toes hold onto the end of the plank was Raj tries to hold the plank as long as he can. Lazlo soon helps but Clam falls off but Patsy soon comes swinging on a rope and rescue the other two. Then Raj complains about Lazlo but Patsy says that the rock is "Right over here." Lazlo soon discovers that it is a bunch of pebbles but Clam soon finds the rock but it is a plaque. Then the Worldwide Bean Scout Jamboree is seen and the four try to get in but a french snail doesn't let them in. However, Clam claims that Patsy is from France. The snail lets then in and takes them to the Big Bean's palace (A can which says Beans).

Back at Acorn Flats, Edward, is worried about going to math camp, and goes to sleep on his stool. He has a dream that he's being chased by numbers, and arrives at the same dock that Lazlo did in his dream. A giant Lazlo head emerges and tells Edward how to help him save Camp Kidney. Edward wakes up saying that he has to go and tell the others."

Lazlo soon finds the Bean and hears deep breathing and soon bangs on the glass and breaks it. It is revealed to be magnifying glass and the bean turns out to be small. Lazlo tries to talk to him but the bean moves and wears a hat similar to the hat Lumpus wears. Lazlo talks about the lake. But the bean says that that was his cousin. Lazlo then asks about Camp Kidney, but the bean says that he closed down Camp Kidney and complains about the camp's bad parts (such as the uniforms) and they leave but Raj cries and Lazlo gave him his neckerchief to wipe the tears. Raj find writing and reads it, making the Big Bean cry. The Big Bean explains that he wrote it when he went to Camp Kidney and Lazlo (After blowing his nose on it) gives it back to him. The bean smiles as Lazlo, Patsy and Clam give salutes.

Meanwhile Edward, the other Bean Scouts and Squirrel Scouts are at the gate of Camp Kidney. Edward explains that he was told to bring everyone to the gate to get what he most desires. A horn sound is heard and Lazlo, Raj, Clam and Patsy come sitting on trucks bringing back parts of the camp.

Later the Big Bean congratulates Lazlo, Raj, Clam and Patsy for their bravery and reopens Camp Kidney. He then gives Lazlo a new neckerchief with the words "Property of HMD" The bean explains that it Hand Me Down. They laugh and fireworks are set off. On the bus Lumpus wakes up after sleeping on the bus ever since the song. He complains about why the camp isn't torn down as Clyde appears again saying "Hey, how's it going?", where this makes Lumpus shriek and faint.

Lazlo: The Fourth of July is next week!
Edward: I know this sounds crazy. but I had a dream last night that told me to gather everyone at the gate and I will get what I most desire. I hope it's a voodoo drum!!!
Raj: (crying) I cannot leave! Lazlo! My tears are blinding me!
Lazlo: Here you go pal, use my neckerchief. I won't need it anymore.
Raj: Lazlo, there is something written on the inside of your neckerchief.
Lazlo: Oh yeah, that was there...when I first got it.
Raj: Let me take to my heart, Camp Kidney, a wonderland where summer runs free...
Lazlo: ...where I laughed and I played while my good parents paid to let their child come of age and be me.
Raj: (laughs) Steaming saffron! Who wrote that hokey baloony!?
Big Bean: (crying) I did.
Clam: Oblivion!
Raj: (screaming) We are never going to survive! WE WON'T SURVIVE!
Edward: What the heck is an arithmalete?! 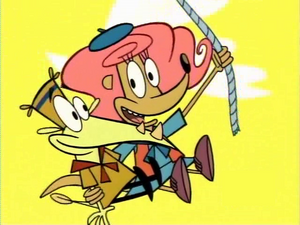