Ignatious is a hedgehog bean scout and a minor character in Camp kidney.

Ignatious is a light grayish hedgehog scout from Camp Kidney. He was seen for a second in "Parasitic Pal" when Lazlo was zooming on the wagon off the dock in slow motion. He, Mort, and Bill played music for Samson in "Are You There S.M.I.T.S? It's Me Samson". He also made a cameo in "Mascot Madness" when Samson was auditioning as a penguin, he was standing beside him opening a soda can. He is voiced by Jeff Bennett. 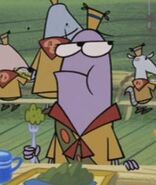 Ignatious having a cold bath 1

Ignatious having a cold bath 2

Add a photo to this gallery
Retrieved from "https://camplazlo.fandom.com/wiki/Ignatious?oldid=18433"
Community content is available under CC-BY-SA unless otherwise noted.