After some rain, the Bean Scouts are about to play in a mud puddle but the Squirrel Scouts are in it and they say the puddle is theirs. Lumpus, who is in love with Ms. Doe, goes across Leaky Lake to Acorn Flats and Ms. Mucus shoots watermelons from the lookout tower at his boat. Lumpus and Slinkman and their boat sinks, and when they arrive Lumpus asks Ms. Doe to a picnic and so she decides to have the Bean and Squirrel Scouts have a picnic together (Lumpus meant just the two of them). The Bean Scouts have pine cone sittings all the time even with each other Lumpus is annoyed like the Bean Scouts. They are all sitting at a long table and a food fight eventually begins between the Squirrel Scouts and the Bean Scouts. After the food fight, the pine cone-sitting contest began as a battle to see who gets the mud puddle. During the pine cone sitting competition, Ping-Pong, Dave, Samson, Raj bottoms hurt so bad it shows their bottoms Raj was in the most pain. However, Lazlo and Patsy Smiles are unaffected and remain completely still. As it comes down to the final two, Lazlo begins to notice he is having hallucinations (because Patsy is using her love for Lazlo to her advantage), thus making him lose. After the match, Patsy checks on Lazlo before taking off for the mud puddle. The episode concludes with the mud puddle completely dried up and the scouts arguing for a tree that eventually falls on Lumpus.

Goof: In a scene in which the Beans Scouts are cheering for Lazlo, Clam's horns are missing. 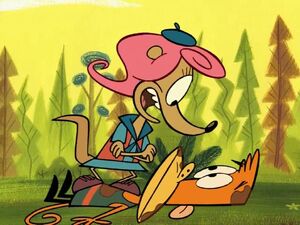 Click here to go on It's No Picnic image gallery