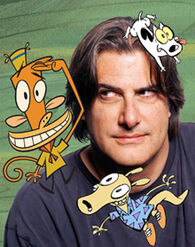 In 2010, with Nelvana and Stephen Hillenberg (The father of Spongebob Squarepants), He worked of the Canadian series: Spliced

Joe Murray also voiced S.M.I.T.S in Bad Luck Be a Camper Tonight and a baggage handler in Miss Fru Fru.

Retrieved from "https://camplazlo.fandom.com/wiki/Joe_Murray?oldid=21581"
Community content is available under CC-BY-SA unless otherwise noted.