Scoutmaster Lumpus wants to watch a comet named after him that passes Earth once every 50,000 years, but the lights at the Jelly Bean cabin are interfering with his viewing. At first the Jelly Beans think he wants to blow up the moon. Lumpus later doesn't see the comet until it disappears for another 50,000 years.

Lumpus wants to see a comet when he got named after it. Slinkman tells the campers "lights out", but the Jelly Beans won't take an order. Now Lumpus has to attempt to watch his comet without them being an annoyance. 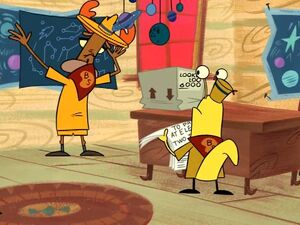 Click here to go on Lights Out image gallery

Retrieved from "https://camplazlo.fandom.com/wiki/Lights_Out?oldid=18499"
Community content is available under CC-BY-SA unless otherwise noted.