The Jelly Beans are down in the dumps because they do not have horses at camp. But one spitfire of a llama will soon change that.

The Bean Scouts feel lousy because they don't have horses. But that all changes when Lazlo calls in a spitting llama. The scouts are soon reminded that it's okay to be a misfit every once in a while. 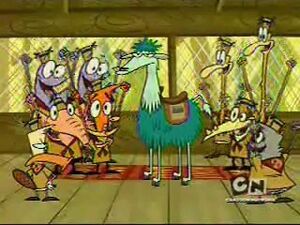 Retrieved from "https://camplazlo.fandom.com/wiki/Loogie_Llama?oldid=22374"
Community content is available under CC-BY-SA unless otherwise noted.