Love Sick is the eighth episode of season two and the thirty-fourth episode on the series.

Clam catches lovesickness and falls for Squirrel Scout Gretchen, so Lazlo and Raj try to snap him out of it.

In the annual Tug-Of-War competition between Camp Kidney and Acorn Flats (where Acorn Flats always wins), Edward gets annoyed by Lazlo making rope shapes. Afterwards, a vicious pull sees Clam fly and clonk heads with Gretchen. Gretchen is fine, but Clam comes off second best and goes to Nurse Leslie's.

A mucus sample from Clam's nose proves Clam is lovesick on Gretchen and is needed to be kept away from Gretchen at all times.

Piping hot tea won't cure Clam, so after contacting his grandma, Lazlo discovers that a certain pie cures love sickness. However, while Raj and Lazlo ride the rails, Clam escapes and finds Gretchen and accidentally ties their neckerchiefs together in a heart shaped knot. Patsy and Nina soon find out and sound the 'Lovesick Bean Alarm'. Gretchen drags Clam around (in a heart shape) and Clam and Gretchen fight, causing the two in a one-on-one tug of war on their neckerchiefs. The two clonk heads again and Gretchen falls love sick with Clam, however Raj and Lazlo arrive and throw the pie in Gretchen's face, eradicating the love sickness.

The problem is cured, but Lumpus falls lovesick with Jane Doe. 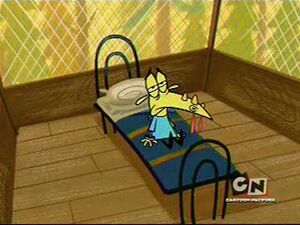