A volcano spirit gets angry at Lumpus when he refuses to sacrifice his chicken pot pie.

Every year, Bean Scouts (and scoutmasters and their assistants) from Camp Kidney sacrifice their favorite foods to Mt. Blackhead, a volcano that hasn't erupted in over a thousand years. When Scoutmaster Lumpus selfishly refuses to sacrifice his favorite chicken pot pie, Slinkman and Jelly Cabin have to get it away from him and throw it into the volcano so it won't erupt. 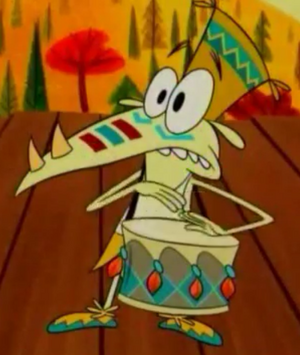 Click here to go on Lumpus vs. the Volcano image gallery

Retrieved from "https://camplazlo.fandom.com/wiki/Lumpus_vs._the_Volcano?oldid=23215"
Community content is available under CC-BY-SA unless otherwise noted.