Mosquito bites form a treasure map on Raj's butt. The Jelly Bean trio go off in search of hidden treasure, but end up finding trouble.

Lazlo tells a story of how a mysterious treasure of Three-eyed Fread, was buried in a strange unknown area known as Itchy Island.


The story states that one day the mosquitoes of Itchy Island will bite the chosen one on his exposed flesh, revealing a map to the treasure of Three-eyed Fread. Nevertheless, a swarm of mosquitoes bite Raj on his rump, and after Raj panic's, we see the bites form a map, immediately causing Lazlo to put two & two together and get caught up in the imminent adventure. While canoeing through Leaky Lake, on route to Itchy Island, we see how caught up Lazlo is in the adventure, doing things like preventing Raj from scratching and even beginning to refer to him as Mappy.


Upon arrival on Itchy Island, the Jellies (Raj now being followed be ever present mosquitoes) start their adventure. Lazlo insists that he check the map. Raj is embarrassed about baring his backside out in the open, but agrees to it anyway. Unknown to the jellies is that two elderly birds siblings named Tommy and Timmy, who came here looking for the treasure when they were just 10 year old bean scouts, and have been here ever since, want to capture Raj to find the treasure. After several failed attempts to by the brothers to catch Raj, Raj plead to Lazlo that they go home only to have his concerns totally neglected by Lazlo.


Seeing an opportunity, the brothers convince Raj that Lazlo and Clam aren't his real friends, and that they can help him with his mosquitoes bite. They then lead him back to their camp, where they read his map and quickly deduce the location of the treasure. Raj soon realizes this and attempts to leave, but to no avail as the brothers prevent this and force Raj to dig the hole for them. Meanwhile Lazlo realizes both that Raj is missing and the fact that he has been neglecting his feelings and then immediately starts searching for him. Soon Lazlo and Clam stop the brothers forcing Raj to dig, and jump to the conclusion that he was captured by escapees from an insane asylum for the elderly and are burying him alive. Once Raj hits the treasure Tommy and Timmy quickly turn on each other, both wanting the treasure for themselves, and immediately start fighting. Simultaneously, Raj and Lazlo go to attack the brothers, (Raj using a shovel and Lazlo using Clam), but by the time they get there they already knocked themselves out.


After a short reunion, the Jellies go to the treasure and find it to be loaded with gold, only to have the mosquitoes lift it, where they then hold it above the characters reach and fly away with it, being futility pursued by both the Jellies and Brothers. 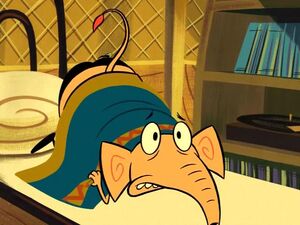 Retrieved from "https://camplazlo.fandom.com/wiki/Lumpy_Treasure?oldid=23144"
Community content is available under CC-BY-SA unless otherwise noted.