Nina Neckerly is a recurring character in Camp Lazlo. She is a geeky and cute giraffe from Acorn Flats with a long neck and high voice.

Nina is the scholarliest Squirrel Scout whose friends are Patsy Smiles, Gretchen, Amber and Almondine. She has a penchant for science fiction, reading sci-fi books, attending sci-fi conventions and for reading comics; she's frequently seen reading one. Her favorite story to read is "Tales to Stupefy". She has a "secret science workshop," which is a cabin where she designs crazy inventions and where she can get away from people. Her favorite character in Battle for BFDI is Book and X. In It's No Picnic, she argues with the Bean Scouts about who owns the mud puddle. In Marshmallow Jones, she roasts marshmallows with Patsy, Gretchen, Almondine and Amber. She observates Bean Scouts in Beans Are From Mars. In Dosey Doe, she dances with Raj. She helps Lazlo on hard situations in The Nothing Club, and Burpless Bean. In Snake Eyes, she is seen next to Gretchen. In Miss Fru Fru she has talent for unicycling. Her solo act in the pageant was portraying an air traffic controller. After she and the other Squirrel Scouts mistook the meaning of the pageant for something that would enable them to fly, Nina became the first to attempt to do so. However, in the end, she went airborne for a moment but splatted on the floor. In Love Sick, she helps Patsy, Gretchen, Almondine and Honey win a tug of war against the Bean Scouts. In I've Never Bean in a Sub, she works as a cashier for the Squirrel Scouts' cookie business. In Snow Beans, and Squirrel Seats, Nina joins in singing on the bus trip. She watches a Mascot Competition with other Squirrel Scouts in Mascot Madness. She plays tennis with Poodle Scout in Beany Weenies. In Spacemates she believed her soulmates are Chip and Skip.. In Squirrel Scout Slinkman, Nina sits next to Toodie. She also appears in Loogie Llama, Temper Tee Pee, Lazlo Loves a Parade, Taking Care of Gretchen and Call Me Almondine.

She and Raj are known as the smartest among the campers. In Squirrel Seats she talks in a most peculiar type of language that Raj says he doesn't understand. They don't talk mostly through the episodes. In Dosey Doe they dance with each other.

In Dosey Doe, you'll note that after Ms. Doe push Nina to Raj, she looked down to him with a depressed look on her face

She and Lazlo are good friends who care for each other. Also in the episode The Nothing Club. when Lazlo said it was a club they both make up together, Nina says it was "pretty cool", implying that she likes Lazlo as a friend. Nina also likes helping Lazlo in some situations.

Nina seems to have a good relationship with Clam. They even pretend to be brother and sister in the episode Step Clam. They tell the lie to the Wingnut Sisterhood club. Unfortunately, Jane Doe unmasks the lie, but Nina and Clam still get along together.

At first, Nina didn't like the dung beetles, but she soon began to like them as she believed that they are her soulmates.

She and Patsy are good friends since they are cabin mates, and also they sometimes when Nina makes fun of Gretchen, they both laugh (to Gretchen's dismay).

Nina sometimes makes fun of Gretchen, but they both still like each other since they are cabin mates, even though Gretchen is rude to Nina at times. Nina is a lot smarter than Gretchen, to be honest. Nina often gets annoyed by Gretchen's foolishness, laughter, and the imitation of Four from Battle for BFDI, and then, they often hang out with each other in public with the others. 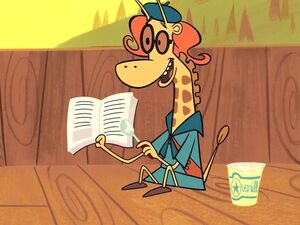 Retrieved from "https://camplazlo.fandom.com/wiki/Nina?oldid=23473"
Community content is available under CC-BY-SA unless otherwise noted.