Lazlo comes out of Leaky Lake with a sea lamprey attached to his head. Lazlo attempts to have fun with "Lamar" (the sea lamprey) until he sucks away Lazlo's blood.

Lazlo goes swimming in Leaky Lake, and a bloodsucking sea lamprey attaches itself onto Lazlo's head. Unaware of this, Lazlo thinks it is a special day at Camp Kidney because everyone is grossed out. Raj tells Lazlo about the lamprey and Lazlo goes to Nurse Leslie to receive help. Nurse Leslie's charts indicate that the sea lamprey is sucking Lazlo's blood; however Nurse Leslie tells Lazlo he is fine.

After that, Lazlo names it Lamar. At this point, a song named "My Buddy Wuddy" is heard. Lazlo extolls his affection for his new "little buddy" for Buddy Day (a special day at Camp Kidney), by playing games, such as ping-pong. Edward wants Lamar off Lazlo's head, so he tells Chip and Skip to jump out of a bush and pull Lamar off. They pull hard but Lamar remains on his head.

Then, Lamar sucks all the blood from him, causing him to be tired and drowsy. Because of this, Lazlo is forced to throw him back into the water, but he discovers that those are Lamar's babies and that he was a female all along. Lamar's name is changed to Lauren, Clam is seen "feeding" his blood to the baby sea lampreys and everyone else (except the Jelly Beans) ends up in Nurse Leslie's office.

At the end, When Nurse Leslie sees how many patients there are, he turns the lights off and rolls off in his chair. 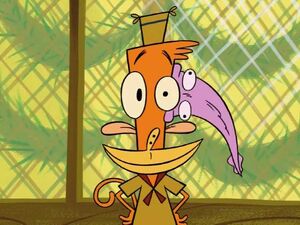 Retrieved from "https://camplazlo.fandom.com/wiki/Parasitic_Pal?oldid=23142"
Community content is available under CC-BY-SA unless otherwise noted.