Patsy Smiles is a cute peppy mongoose from Acorn Flats. She is voiced by Jodi Benson, who is well known for voicing Princess Ariel from The Little Mermaid series and Kingdom Hearts series, and Helen of Troy from Disney's Hercules. 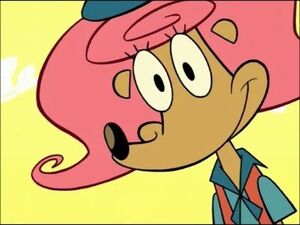 Retrieved from "https://camplazlo.fandom.com/wiki/Patsy_Smiles?oldid=23459"
Community content is available under CC-BY-SA unless otherwise noted.