When the camp chef falls ill, the entire camp goes to town for a meal, but due to not having brought in any money before they came in, Lumpus makes the camp dine and dash much to the turkey cashier and bear waiter's anger. However, they leave behind Lazlo, Raj and Clam who are sabotaging the bathroom for fun and Lumpus and Slinkman aim to retrieve them to avoid legal matters.

On the bus, the Bean Scouts are being noisy and Lumpus tries to make them be quiet, but Slinkman hits a pothole, making Lumpus almost fall down. The Bean Scouts laughed at him and Slinkman apologizes for hitting a pothole. Then, Lumpus reminds the Bean Scouts about why they have to go to Prickly Pines to eat and they get so happy because they like to throw things. Also, he expects them to behave since the explosion in Prickly Pines and the Bean Scout code means most on the road.

The Bean Scouts rush out of the bus's door and step on Lumpus. The Jelly Beans walk together and they carry Lumpus into Beef Lumberjacks. He wonders what they are up to. A turkey asks how many and Lumpus makes a joke. The turkey asks him and the Bean Scouts to follow him.

At the dining table, Lumpus asks Slinkman what he wants to eat. Slinkman wants a salad bar. The Jelly Beans look at Lumpus's elbows. Lazlo whispers to Lumpus that he needs to take his elbows off the table. Suddenly, a bear comes to the table and welcomes the Bean Scouts. He gets out a chainsaw by slicing some beef and chopped it in half. Lumpus tells him to stop, but the brown bear keeps chopping the beef. Finally, Lumpus shouts loud enough for him to stop.

Now that everyone has eaten their food, they groan in pain because they ate a lot. The Jelly Beans excuse themselves and the bear comes with the desserts. Everyone groans again. In a restroom, we find that the Jelly Beans are washing their hands. When they press the soap dispenser, they hear a funny sound. Clam suggests that they press it again, but Lazlo denies wanting to do it because of the Bean Scout Code, but he presses it and they laugh. Soon, they start pressing the soap dispenser many times. The bear comes with a check, but Slinkman and Lumpus find that they don't have enough money to pay the check. Lumpus announces to the Bean Scouts that camp tuition has gone up and that he has to collect immediately. Back in the restroom, the Jelly Beans pull toilet paper, pull paper towels, flush a toilet, close a door, clean a window, and do much more with the restroom.

Lumpus shakes a Bean Scout to see if he has any money to pay the check and throws him. He finds that he has a frog, a gumball, and a nickel. He pushes the Scouts to the bus and he sees the bear chopping a wooden table. Now the furious brown bear angrily chops the bus door off, but luckily they get away. In Lumpus's cabin, he discovers that Chef Heimlich McMuesli is resting on Lumpus's couch. He is on his couch because he can't be moved according to Nurse Leslie. The phone rings and Lumpus tries to prevent Slinkman from answering the phone. Slinkman answers it anyways and hands it to Lumpus. It's just Clam's mother on the phone and Lumpus asks Slinkman, "Do we have a Clam?" Slinkman responds by telling him that they left the Jelly Beans at Beef Lumberjacks. Lumpus gives the phone to Chef McMuesli and Lumpus goes to his poop-deck, but Slinkman reminds him that they are responsible to the Jelly Beans. Lumpus thinks they can find their way back, but if the parents find out, it could be messy.

In Beef Lumberjacks, Lumpus puts on lipstick and then he put lipstick on Slinkman's lips. They meet the turkey and the turkey asks them about helping the duo. Lumpus wants a table and Slinkman asks, "Hey man, how's it going?" Lumpus looks at him and Slinkman says, "What?" The turkey informs them that they should have a table in about fifteen minutes. Lumpus and Slinkman decided to powder their noses, but they aren't really going to powder their noses. Instead, they check the restaurant to see if the Jelly Beans are in there, but Lumpus doesn't see them and he insists on going back to Camp Kidney. Slinkman hears Lazlo and it's coming from the restroom. Lumpus comes back and tries to push the door to the restroom open. He asks the Jelly Beans to come out of there, but they do nothing because the Bean Scout Code does not allow them to talk to strangers. That makes Lumpus very angry and he rams the door by using Slinkman as a tree log. He opens the door and a whole flood of water comes out of the restroom thus flooding the Beef Lumberjacks. Lazlo realizes that Lumpus was trying to save them and he was trying to protect the good reputation of Camp Kidney in front of the customers. The turkey tells Lumpus that he was the one who left Beef Lumberjacks without paying. He commands the brown bear to do something with Lumpus using his chainsaw.

We find Lumpus on the wall and an owl kid throws food at him. He gets his head out of the wall and the Jelly Beans are cleaning the restroom and they talk about the Bean Scout Code. The turkey orders Lumpus to insert his head back in the wall as the episode ends.

Credits: Chef McMuesli is still on the phone with Clam's mother until she hangs up due to his illness. 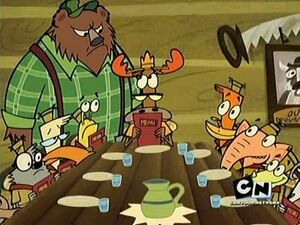 Retrieved from "https://camplazlo.fandom.com/wiki/Prickly_Pining_Dining?oldid=22353"
Community content is available under CC-BY-SA unless otherwise noted.