Radio Free Edward is the nineteenth episode of season three and the episode on the series.

The Bean Scouts discover Camp Kidney has a radio station and decide to put on some radio shows. Edward fakes a yeti attack when his radio show does not get any listeners.

While playing baseball, the campers find the old Radio Station and decided to start it up again.  Each camper decides to do there own show while Edward decides to do a talk show.  Since Edward's show isn't going well, he makes a sham about a Yeti attack.  It was all going okay, that is until a real yeti comes and attacks.

Freddie: Now, I'm going to open up the request lines. (phone rings) Hello? And what would you like to hear tonight?
Lumpus: Turn off that racket! You're driving me crazy!
Freddie: You got it, baby. Here it is. "Turn Off That Racket, You're Driving Me Crazy."
Edward: (over the radio) They're getting closer! This isn't a stunt! Call the Coast Guard!
(Chip and Skip begin crying from their cabin, Samson then enters)
Samson: Hey, you guys! Chip, Skip, come on, you two. We're gonna go watch Edward getting eaten by yetis!
Chip and Skip: Cool!
Lazlo: Come on! Hurry!
Clam: Save Edward! Save Edward!
Dave: Where you going?
Raj: Radio station.
Clam: Save Edward.
Dave: (to Ping Pong) Want to watch Edward get eaten by yetis?
Ping Pong: It beats sitting here.
Camper: Edward? Will you sign my omelette?
Yeti: And this one goes out to that little platypus chap cowering in the corner.
Edward: Noise pollution is not cool.
Samson: Is there gonna be another yeti attack tonight? Cause, I gotta get to sleep soon.
Edward: Well, let's just say, (Shoves his beak into the tin can phone, creating an ominous echoey sound effect) stay tuned!
(He takes his beak out of the tin can and snickers)
Edward: Oops! Another concerned camper? (Answers the tin can phone) Yes, hello, don't worry about-!
(A yeti roars down the phone at Edward, sending his fur flying. Edward notices his sound effects record isn't playing.)
Edward: Wha...? (He starts stammering and trembling) Scoutmaster Lumpus? Was that you...?
(He hears growling and snarling at the door and all his fur stands on end).
Edward: I th-thought I told you guys... n-not to come up here!
(The frightened platypus now sees hairy hands at the window)
Edward: MOTHER OF MERCY! I'M BEIN' ATTACKED BY YETIS! 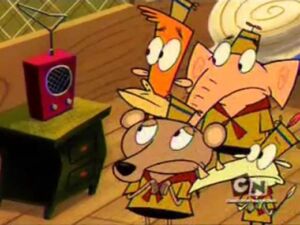