S Is for Crazy is the eleventh episode of season five and the one hundred and ninth episode on the series.

A jellyfish attaches itself to Samson's head, frying his brain, and he and Lumpus start chaos. Unfortunately, Samson's pranks go too far when his parents (who turn out to be jellyfish) call to visit the camp.

Lumpus is at the Beaver's cabin and tells him that he is bored until Samson starts acting crazy (along with Lumpus) after a jellyfish attaches itself to his head and Samson and Lumpus start pulling pranks on everyone, Including Prickley Pines.


Slinkman has been getting complaints about Samson and Lumpus and sends Lumpus to his room where Lumpus sucks his thumb. However, Samson turns the tables on him by nailing his entire bedroom to the ceiling. Lumpus starts to get irritated and then he becomes scared out of his wits when he sees that Slinkman is now a pile of salt. Lumpus restores Slinkman back to normal and Slinkman points out "That was not funny", Though Samson keeps laughing at Slinkman's expense and gets out of Lumpus's cabin.


After Lumpus visits the armadillo, The phone rings and Lumpus answers it and whoever is calling him wishes to speak to Samson but Lumpus states the rule "Campers are NOT allowed to get on the horn", starts insulting the caller and dares the caller to come to camp as Slinkman tries to stop Lumpus. Lumpus feels confident until Slinkman points out that Lumpus accidentally insulted Samson's parents. Lumpus realizes this and hides in his shirt and screams. 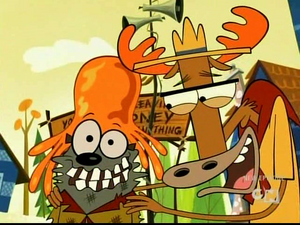 Click here to go on S Is for Crazy image gallery

Retrieved from "https://camplazlo.fandom.com/wiki/S_Is_for_Crazy?oldid=23237"
Community content is available under CC-BY-SA unless otherwise noted.