Scoutmaster Lumpus (Full name: Algonquin Casper Lumpus) is an impostor, a stingy, grumpy, fake, stubborn, bad-tempered moose with a big ego. His head has the same design of Heffer Wolfe's head from the TV series Rocko's Modern Life. His last name is always mispronounced by almost everyone except for Raj and Slinkman. Everyone else refers to him as Scoutmaster "Lump-us" instead of pronouncing it as "Loompus". Everything has to be exactly how he likes and wants it to be or he becomes enraged.

He is almost always in a bad mood and this horrible disposition could have been caused by his parents' failure to train him as a mime and tell him that they love him or even show any signs of care for him [citation needed]. One of the few things that does make Scoutmaster Lumpus happy is doing what he can to ruin the fun for the other scouts. This includes confiscating packages sent to the campers from home, because they're against camp rules.

However, the very thought of eating canned tuna can turn his personality around. Nobody, however, knows Lumpus's secret: he loves playing with dolls and has a collection of them stashed in his closet. He is a member of a secretive club called the "Legume Council" and desires to be Grand Legume. Lumpus had a ritual of visiting an old site near the camp where his great-grandfather, General Sherman Beauregard Lumpus, had fought in and won a war though after an attempt to scam his fellow troops. Slinkman revealed to Lazlo, Raj and Clam of Jelly Cabin the "war" was actually this: General S. B. Lumpus was attacked by his own men, rolled down Pimpleback Mountain, fell onto a passing circus train, and was last seen being eaten by clowns and a very hungry mime. (Old Ironside, was built of tents he had stolen from his own troops)

Scoutmaster Lumpus hates almost everyone, especially Slinkman and Jelly Bean Cabin, and lacks any kind of social skills. His disrespectful nature is targeted towards Slinkman and does whatever he wishes to make Slinkman's life as miserable as his, despite the fact that he truly likes Slinkman deep-down and considers Slinkman his friend, he even went to Camp Kidney with him years before, but sabotaged Slinkman's dare devil career because it made Slinkman happy. The only individual he shows any respect towards is Commander Hoo-Ha, due to Hoo-Ha being his boss and the fact that he intimidates Lumpus.

He's incredibly childish like a big poo poo pee pee baby, constantly whining towards Slinkman, playing with bath toys, being freaked out by horror movies, etc. He's also very rude and pushed Clam out of the way to get pancakes in Clam the Outlaw.

In the series finale, he was revealed not be the real scoutmaster, but rather a lunatic that held the "real scoutmaster", a steer, for the summer. However, this idea contradicts previous episodes that showed Lumpus as the real Scoutmaster. Such as when Lumpus reveals how he became scoutmaster "legally" by his great grandfather inheriting it from the deceased former scoutmaster (The episode which Lumpus also presented photographic proof of this event.) As well as Slinkman first meeting Lumpus years back when he first started working at Camp Kidney. It is possible that the real scoutmaster saying that him being locked in the closet by Lumpus all summer was an error and he meant to say years (All the years he has been scoutmaster). In addition he dislikes his job as scoutmaster and is really lazy and not too bright, making it even more unlikely he would lock the "Real Scoutmaster" in the closet. How ever in the series finale, Lumpus is arrested and commited into a mental asylum for posing as the scoutmaster. He has a big belly. 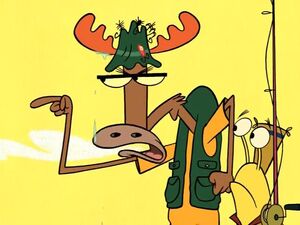