Slinkman is the assistant scoutmaster to Lumpus, supporting protagonist and the property of Camp Kidney.

Slinkman is a yellow banana Slug , and like a real Slug, Slinkman is an invertebrate organism.

He knows the Bean Scout handbook cover-to-cover (although he seems to always read it upside down). He's shown to be loyal, kind and obedient. Even though Slinkman is the one who basically runs Camp Kidney, he still has to answer to Scoutmaster Lumpus. Also, he generally assumes a submissive role, doing nearly everything for Lumpus and almost always obeying his every command.

There have been a handful of situations where Slinkman stood up to Lumpus, such as in "Slugfest," where he tried to hold him to a promise made upon Slinkman's employment that he would have three days off when the Slugfest was going on. After Lumpus denied him, Slinkman suffered a temporary emotional breakdown, destroying many of Lumpus' possessions, belching into the camp PA system, and licking Lumpus' hands, getting slug slime all over them. However, these instances are the exception and are usually only when Slinkman's compliant, non-confrontational nature is pushed to the limit.

Slinkman has to do a lot of back-breaking work as assistant scoutmaster, and has been working there essentially non-stop for At least five years. Slinkman loves the campers, particularly those of Jelly Bean Cabin, and sometimes will join their ranks despite being much older. As seen in "Lights Out," Slinkman is a master at shadow puppets, complete with a perfect imitation of Scoutmaster Lumpus. In "Beans and Pranks," Slinkman is ordered by Lumpus to infiltrate Jellybean Cabin and find proof that they are the ones pranking him every year on June ninth, only to reveal to the audience, while writing his diary, that he does it each year to get back at Lumpus for forgetting his birthday; afterwards, Wumpus gives him a gift and says "by the way, the handwriting in your diary? Atrocious." He has a not-so-secret desire to be a race-car driver and reads racing magazines. It was revealed in "Slugfest" that Scoutmaster Lumpus actually enjoys hanging out with Slinkman. In the first few seasons, Slinkman always carried around a clipboard, saying, "yes, sir", almost every time he was ordered by Lumpus to do something. As the series progresses, Slinkman says "yes sir", less and less, eventually dropping it as a catchphrase.

He also used to be the camp's local daredevil when he was a Bean Scout along with Lumpus, but had to stop when Lumpus secretly sabotaged his last jump. 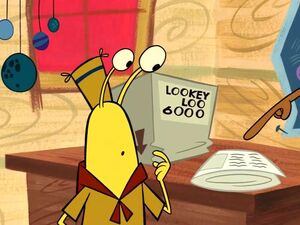