Slugfest only happens every five years, and Slinkman has tickets. The only problem is that Scoutmaster Lumpus does not want to let Slinkman have a vacation.

The episode starts off when Slinkman is sleeping. He wakes up and looks at his calendar and suddenly he smiles with excitement. Then, he wakes up Lumpus and starts doing things for him that include giving him toilet paper, handing him soap, brushing his teeth, fixing his tie, giving him his hat, and moving his feet onto his desk.

Outside Lumpus's cabin, we find the Bean Scouts playing baseball and Clam throws the ball. Lazlo hits the ball with the bat and it results in one of Lumpus's windows breaking. Slinkman comes by and says good morning with a happy look on his face to the Bean Scouts. Lazlo apologizes to Slinkman about breaking the window. Slinkman doesn't think it's a big problem and says that he will fix it. Suddenly, Edward stops Slinkman in his tracks and tries to convince him to stop smiling. Lazlo asks Slinkman why he is happy and he is happy because of Slugfest. Slugfest is an event where slugs slime each other for three days and eat cotton candy. To go to Slugfest, he has to persuade Lumpus to let him go to Slugfest. Lazlo and Edward hope he has good luck with that.

In his cabin, we find that Lumpus is fixing his ship in a bottle and Slinkman tries to fix it for him. He gives it back immediately after fixing it. Lumpus thanks him and Slinkman reminds Lumpus of the three days off he promised to him. We now get to see a flashback of Camp Kidney being built. Lumpus back then talks to Slinkman about being scoutmaster's assistant. Slinkman accepts the job on one condition: every five years in August, slugs like Slinkman gather together for Slugfest. In order to celebrate it, Slinkman has to take three days off from work. Lumpus accepts the promise because of his credentials, however he doesn't remember making any promise now. Shortly, Lumpus and Slinkman argue about the promise and Lumpus tells Slinkman that he's too valuable to leave Camp Kidney. He asks that Slugfest should be rescheduled, but Slinkman tells him that it cannot be rescheduled. Lumpus convinces him not to leave because if he did leave, the whole camp can fall apart. Slinkman walks away and Lazlo wonders how it went while Edward thinks he chickened out. He tells them that he can't go to Slugfest. Edward says to Slinkman that he chickened out. Lazlo won't let Slinkman walk out of this situation, so he tries to help him. He shows him role playing.

Lazlo will be Lumpus and Slinkman will be himself and Lazlo tells him what to do. Slinkman says his lines and stops when Lazlo (acting like Lumpus) angrily scolds at him for not knocking. So, Slinkman pretends to knock on the door and tries to tell Lazlo about Slugfest, but Lazlo is talking to a banana. He wants to go to Slugfest and Lazlo keeps rejecting his request. They try again, only this time, Clam will be Lumpus and Slinkman thinks this is ridiculous. Since Slinkman doesn't like doing this, Lazlo tries to be Slinkman. Clam starts to make a grumpy look on his face and when Lazlo wants to go to Slugfest, Clam keeps growling. Lazlo mentions rule number two million and Clam congratulates him with a scone. Slinkman walks away. In the laundry room, Lazlo pops out of some clothes and promises that he will do Slinkman's chores for him, so that he can go to Slugfest. Slinkman drops a towel on him. In Slinkman's room, Clam, Raj and Lazlo go into his room and Lazlo takes Slinkman to a window. Slinkman falls to the ground and there, they take him to Camp Kidney's gate. Lazlo encourages Slinkman to get out of Camp Kidney, but Slinkman won't go. He takes off his mask and explains why he can't go to Slugfest.

Slinkman is now in his bed, looking at his calendar. He falls to the floor and wakes Lumpus up. Lumpus wants toilet paper, but Slinkman won't give it to him. Slinkman is shaving Lumpus's face. When Lumpus is in the shower, the water suddenly gets very hot. Slinkman fixes his tie very tightly nearly choking Lumpus, and moves him to his desk. Lumpus thinks that his ship in a bottle is very sloppy and commands Slinkman to fix it and instead, he ruins it and calls it a shipwreck and that scares Lumpus out of his wits as he thinks Slinkman has gone crazy. Slinkman drops the ship in a bottle and he starts to make Lumpus's cabin very messy by using a mop and a vacuum. Lumpus orders him to stop but Slinkman makes Lumpus's allergies arrive, belches at the Bean Scouts, and licks the microphone and Lumpus's hands. Some of the other things he does is breaking his marching band records, makes a picture crooked, and releases the marlin into Leakey Lake, sending Lumpus into a panic and making Lumpus coward under his desk. The Bean Scouts watch as Slinkman destroys the cabin and The Bean Scouts also think that Slinkman is crazy.

The destruction is over when the overflowing water makes Slinkman fall out of the cabin. Lazlo congratulates Slinkman for standing up to Lumpus. Slinkman hears Lumpus crying and he goes into the cabin. He apologizes to Lumpus for going ballistic and Lumpus appreciates Slinkman's dedication. The reason that Lumpus wants Slinkman to be around is that he likes hanging out with him. Finally, Lumpus lets Slinkman go to Slugfest. In return, Slinkman asks Lumpus if he can come with him. He asks everyone about how slimy he is and Lumpus would like to come with him. We see Lumpus and Slinkman at Slugfest and Lumpus falls on slug slime. While they walk, slugs are walking by and one of them gets covered in slime. 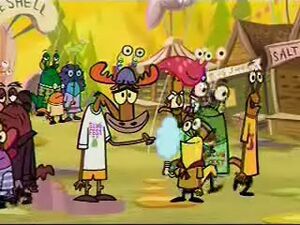