The Jelly Beans befriend a garter snake, which gets loose and goes on a mad rampage.

Lazlo, Raj, and Clam find a snake called Snakey and bring him back to jelly cabin.  They lose Snakey and become scared, because they heard weird noises. They thought it was snakey but to there surprise it was only Patsy Smiles.

She told the jelly beans that she knew kung fu ..... etc And decided to help find it. Raj said he would stay inside the cabin, but later he agreed to go on the journey.In the mean time, the bean scouts were doing there activities when suddenly they saw Snakey and got scared and the scene cut to Lazlo and Patsy in the closet. Lazlo says why are we in here. and Patsy says "um want some ice cream and Lazlo gets angry.after a while Patsy saw a eye glass in a leaf and says this must be Snakey's glass and the snake is very furious because it lost it. Lazlo says you don't get the whole picture don't you angrily. Snakey ate the bean scouts because he was hungry!! Raj says I'm gonna be eaten by a snake!!! says Raj scared and goes up the tree. Lazlo noticed that Raj and clam were not there!!! so Lazlo thought Raj and Clam were eaten by the snake and says that (tears in his and Patsy's eye) that he and her are gonna be eaten by the snake and blinks. Patsy ran away, saying he is gaining on you!!!!!! Lazlo does not know what Patsy was talking about when he realized that Snakey was behind him and ran with Patsy.

he told her that what about the cool kung fu then patsy said she lied about it. then Lazlo says (when closing the door) why Patsy. Patsy says "​​love makes us do craazy thing" Lazlo says "Patsyyyy" (in a sad voice) but we shaked hands

Patsy looks at Lazlo sadly and says I always loved you kid and swings through the vine and to Lazlo's surprise she came back swinging and pushed Lazlo out of the door. Lazlo says happily Patsy u came back Patsy says that Pasty Smiles never leaves a hand shake. and fought the snake and after that Patsy said that Snakey in a poor creature that could not do any harm. and Snakey open it mouth (Snakey's trick) and Raj's voice was heard and Lazlo cried about it and Patsy was looking at Lazlo a little sad and surprised. Lazlo then figures out that all the Bean Scouts and Squirrel Scouts where up the tree with their scoutmaster and mistress and the episode ends when Lazlo finds a bear and asks him to stay. 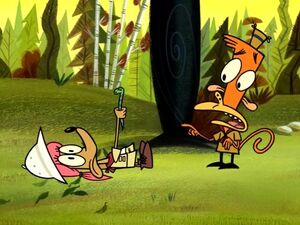 Retrieved from "https://camplazlo.fandom.com/wiki/Snake_Eyes?oldid=22252"
Community content is available under CC-BY-SA unless otherwise noted.