Lumpus: It's not fair but I don't even care.
Slinkman: (Saw Lumpus reflection at the rock) Oh my gosh. I've-I've become Lumpus. 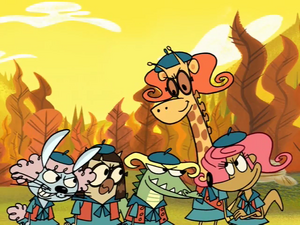 Retrieved from "https://camplazlo.fandom.com/wiki/Squirrel_Scout_Slinkman?oldid=17315"
Community content is available under CC-BY-SA unless otherwise noted.