Squirrel Seats is the episode of season three and the fifty-ninth episode on the series.

Patsy tries to sit with Lazlo on the bus, but ends up causing problems with the other Bean Scouts. 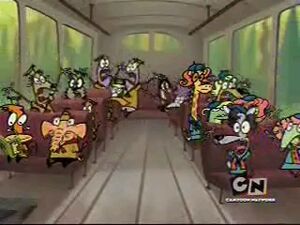 Retrieved from "https://camplazlo.fandom.com/wiki/Squirrel_Seats?oldid=14359"
Community content is available under CC-BY-SA unless otherwise noted.