Step Clam is the tenth episode of season five and the episode on the series.

Clam pretends to be Nina's brother to get her in the sisterhood club.

Clam pretends to be Nina's younger brother so she can get into the Wingnut Sisterhood. 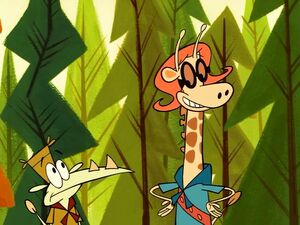 Retrieved from "https://camplazlo.fandom.com/wiki/Step_Clam?oldid=21076"
Community content is available under CC-BY-SA unless otherwise noted.