Ted/Chuck is a pig character that appears in Camp Lazlo. He is a pig Bean Scout that attends various activities in Camp Kidney. 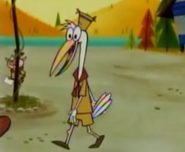 Retrieved from "https://camplazlo.fandom.com/wiki/Ted?oldid=22947"
Community content is available under CC-BY-SA unless otherwise noted.