When Commander Hoo-Ha announces the annual camp inspection, the rest of the scouts cook up a plan to keep Lazlo, Raj and Clam out of camp. But since Lazlo is the only one that can start fire they must get him back or else no clean underwear for another year. 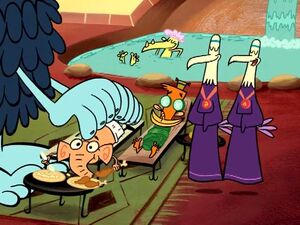 Click here to go on The Weakest Link image gallery

Retrieved from "https://camplazlo.fandom.com/wiki/The_Weakest_Link?oldid=23035"
Community content is available under CC-BY-SA unless otherwise noted.