Lazlo turns into "Madame Lazlo", who offers the campers predictions when he finds Ms. Mucus' wig.

Ms. Mucus comes out of a bush. She removes a wig from her head and shakes it. Then, she runs into the water and takes a dive.

Lazlo screams and runs. Clam runs after him and Raj says he's not a juice machine and that he's a robot. They see Miss Mucus' wig and Clam asks, "What is that?" Lazlo commands Raj to pick the wig up, but he says he is a juice machine and not a robot. Lazlo picks it up instead and says that it's a wig. He starts acting like a caveman, a hippie and now he says he is Madame Lazlo.

Lazlo makes a prediction that a water beast will arise out of the water and it comes true, but it's actually just Miss Mucus jumping out of the water. Raj and Clam want Lazlo to predict something again. Lazlo predicts that Samson will be hit by a volleyball and it comes true, too. Then, Edward wants a prediction, but it will cost a smile, but it is a sign of affection and he does not have it for Lazlo.

Raj tells about Lazlo's predictions and the wig. Chip asks what Raj is supposed to be. Raj tells them that he is the wig keeper.

Chip and Skip give him a smile and Raj allows them to enter. They walk over to Lazlo at a tree stump and Lazlo introduces himself and tells them to sit down. Chip tells Lazlo that they are seated. Lazlo already knows about that and Chip and Skip gasp. They tell each other about how Lazlo predicted that they would sit after they did it. They also tell each other that he knows that past and the present.

Ping-Pong is next in line and comes over to Lazlo. He tells him about Dave. Dave tells him that Lazlo can give out predictions. Lazlo predicts that Ping-Pong will become allergic to his predictions, sneezes and leaves. Samson comes in. He says, "Madame Lazlo, I have this problem." He then gets hit with a volleyball again.

The Bean Scouts line up to get predictions from Lazlo and Raj informs Lazlo that he is becoming very popular. He asks, "Who's next?" and Slinkman appears and whispers, "Psst! Madame Lazlo's presence is being requested by a very important but anonymous patron."

We now get to see Lumpus in his cabin and Lazlo says that the cabin is kind of dark. Lumpus tells Lazlo about another scoutmaster's dreams of fame and fortune and asks him to help him. He wants the scoutmaster to get away from his camp as possible and never ever come back. He pays him with a gift with a ballerina dancing, but its eyes fall off.

Lazlo starts to make the prediction and says that he will have to dress up as a ballerina, stand up by the camp's gate at 8 pm and then a chariot of light will turn into fame and fortune.

Lumpus is pleased that his friend will be happy and Lazlo giggles.

Lazlo comes back and says that his wig has worn out. He does not want to make anymore predictions, but he has to make more. He does one for Raj and Clam and predicts that they will be visited by the legendary pink geek. Raj asks, "What's a legendary pink geek?" and Clam replies, "Don't know."

Next, Lazlo comes out of a curtain and everyone cheers for him. Edward gives Lazlo a paper with a smile on it so he'll have a prediction. Lazlo admits that he was just playing a game and it was all for fun. Everyone gasps when he takes off his wig. "You're just saying that to avoid giving me a prediction," Edward responds. Lazlo tells everyone that the wig is fake and the campers tell him about the predictions he made. Everyone starts to demand a prediction after Skip says that Lazlo predicted he would say he was a fake.

He writes something in a wig containing a prediction that will never happen in many years to prove it was just a game and will reveal it to them tomorrow. The Bean Scouts walk away while Edward wants the wig.

At night in Jelly Cabin, Raj and Clam want Lazlo to tell them about the pink geek, but Lazlo keeps saying no and tells them to go to sleep. Lazlo jumps out of bed and tries to find a place to hide the wig where no one will find it, but there aren't that many good hiding places to put it in, for example, when he went on to Leaky Lake to hide the wig, the campers including two of the Lemmings, Raj, Samson, Chip and Skip were hiding in the water and they all said, "Do you come here often wig?" and Lazlo screams. He digs a hole in the ground, but Samson and the Bean Scouts are hiding in the pile of dirt and they still want the prediction.

Edward asks Lazlo in a strange way, "Okay, Madame Lazlo, but aren't you going to charge me a smile first? A big old smile like this one? Is this smile big enough for you?!" Edward starts to laugh maniacally and continues by asking,

"Now can I have a prediction? Huh? Is that okay? Can I have your prediction now, Madame Lazlo?" He looks in the hat and finds out that he will smile for Lazlo.

He tells everyone that Lazlo is a fraud and they should forget that the whole thing ever happened.

They see Lumpus as a ballerina picking up Miss Mucus's wig and waits for the chariot of light to arrive. The chariot of light is just a police car and Miss Mucus comes out of the window and points at the wig claiming that it's hers. After that, Lumpus runs away from her and Camp Kidney. 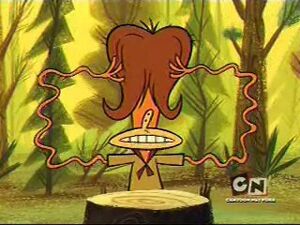 Click here to go on The Wig of Why image gallery

Retrieved from "https://camplazlo.fandom.com/wiki/The_Wig_of_Why?oldid=23149"
Community content is available under CC-BY-SA unless otherwise noted.