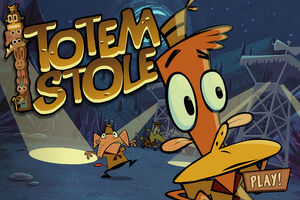 Totem Stole is a online flash game that can be played on Cartoon Network and various website. The goal of the game is to retrieve the stolen jelly bean's totem pole from the squirrel scout's camp.

Battle the Squirrel Scouts and sneak into Acorn Flats to get the totem pole back.

Lazlo: Oh no! This is terrible!
Lazlo: The Squirrel Scouts stole our Totem Pole!

Retrieved from "https://camplazlo.fandom.com/wiki/Totem_Stole?oldid=12383"
Community content is available under CC-BY-SA unless otherwise noted.