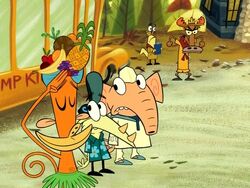 The Next morning, when Lazlo's beanie is found, along with a grizzly mess, everyone assumes that he's been eaten by the bear. But When Edward can find neither the bear nor Lazlo, he makes up a story about how he tried to save Lazlo and scared the bear off, and demands the camp's respect. The next series of scenes deal with both Edward spinning a web of lies, and Lumpus trying to come to grips with Lazlo's disappearance, but only due to Lumpus' fear of Commander Hoo-Ha, not over any real concern for the missing scouts. Cabin reunited. Finally understanding that Edward was lying the whole time, Raj and Clam find Lazlo in the Prickly Pines restaurant, Beef Lumberjacks. Lazlo explains the incident, but Lazlo is reluctant to return to Camp Kidney, because it's a joyless place. Clam and Raj end up convincing Lazlo to return, but upon Lazlo's return, he finds the bear raving the camp, which also exposes Edward's duplicity, due to Edward ultimately being a coward because he doesn’t even been a Bear Hunter. In the end, it turned out that Lazlo was using the bathroom and the adventure affected Raj and Clam as he was really gone for a small period of time.

Raj: [Still Crying And Wailing] "We were a trio......it seemed like only yesterday when we first met."

Lumpus: (a banana truck crashes into Camp Kidney and goes towards Lumpus.) "Ahhhh!" (the truck runs him over and stops.)

Fruit Bat: "That's what happens when they get a fruit bat to drive a big banana."

Lumpus to Slinkman: "It's a miracle! Lazlo has returned!" (Opens door.)

Samson: (shouting) He made me do it! (Hits Lumpus.) Bad moose!

Add a photo to this gallery
Retrieved from "https://camplazlo.fandom.com/wiki/Where%27s_Lazlo%3F?oldid=22786"
Community content is available under CC-BY-SA unless otherwise noted.